if you sit under the table, you'll get rice on your head
4 Comments 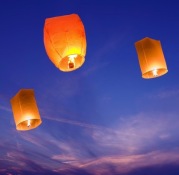 There used to be a TV commercial for a margarine product that supposedly tasted just like butter — so much so that even Mother Nature was fooled. Not happy about that, she then used her power to inflict all kinds of misery on the world (thunder, lightning bolts, etc.). The spot’s tagline –“It’s not nice to fool Mother Nature” — feels particularly apt right now.

In this past year, especially, it seems that Mother Nature (or God or Goddess or Higher Being or the Universe or whatever you call the source from which you draw your faith, if indeed you do) has had it. Life-shattering natural disasters — hurricanes, fires, mudslides, blizzards — have abounded in number and severity to the point where it often feels as if the world is about to end. The wrath of God (or God-like power) in response to the state of our nation seems like a terribly real thing — even to someone like me, who is still trying to figure out my own belief system.

Feeling helpless cannot be an excuse; “ignore it and it will go away” is wishful thinking; turning a blind eye to the hatred, a deaf ear to the cries of injustice, a silent voice to the need for change are all non-actions that only add fuel to the blaze of ugliness.

Of course I know that science can explain the tragic natural occurrences. I know that the logical answer involves global warming, changing weather patterns, the shifting of tectonic plates. I know that inhumanity does not cause hellacious fires, deadly rivers of mud, or life-erasing earthquakes, hurricanes, or tsunamis. But I also know that the more we see the natural world in an uproar and the more we become aware of our own mortality, the greater our urgency to set things right, to do the right thing, to protect human rights.

“Darkness cannot drive out darkness,” the Reverend Dr. Martin Luther King said. “Only light can do that.”

The time is now. Illuminate.

when i’m not writing this blog …